It has been maintained repeatedly by many historians and erudite scholars that the concrete date of introduction of Islam to Yorùbáland is unknown.  However, S. A. Balogun has established that Islam made an advance into the land for the first time around the second half of the eleventh century by a group of people called ‘The Murabitun’ mistakenly taken by some historians as Hausas.
Thus, the nomenclature Imale given to Islam in the Yorùbáland further gives the impression that the religion came from Mali and spread by the Murabitun whom they believed to be Malians.  This supports the earlier mentioned submission of Al Iluri that Islam made its appearance in Yorùbáland in the 13th century during the tenure of Mansa Musa of Mali.
In the same vein, H. O. Danmole also claimed to have come across some Muslims in Oke-Imale Ilorin who claimed that their ancestors came from Mali to settle in the town.  He, however, doubted the validity of this claim since it was not possible that these Ilorin Muslims were descendants of Wangara lineages which traced their origin to old Mali. However, there is a related account in Iseyin.
Prof. T.G.O. Gbadamosi in his pioneering study of Islam in Yorùbáland dates the introduction of the religion from the reign of Alafin Ajagbo and attributes it to one afaa (Alfa) Yigi, whom he described as an Arab, a man referred to as Baba Yigi (another Scholar). However, Afaa Yigi could have been a Nupe Muslim rather than an Arab and Islam may have penetrated Yorùbáland before the incident that brought him to Oyo to demand an apology from Alafin Ajiboyede after the Alaafin had unjustly ordered the execution of some nobles who had wanted to express their sympathies with ruler upon his son’s death.
Another very plausible variable to these reasons is that he might just have been the first learned Muslim to visit Oyo officially rather than the first Muslim to come to the Oyo Empire. 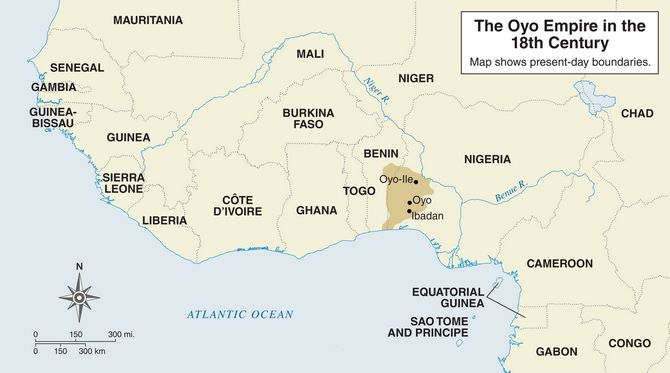 If the account of Law that Oyo Empire was ‘a West African Cavalry State’ is to be considered, then, the horses that were said to have given the empire such title were imported from the North with Nupe and Hausa slaves who looked after the horses.  These slaves were believed to be the initial agents of the spread of Islam in Yorùbáland
The origin of the Imale, which has direct connections with the early spread of Islam, has for some time piqued people’s curiosity and has consequently led to investigations by historians and others. Some scholars suggest that the term Imale (Muslim) points to the link with Old Mali. Others suggest a connection with the Muslim traders referred to as Malais, whose presence in the port of Allada not far from Yorùbáland was reported from 1704.
Others still maintained that western route link possibility cannot be dismissed because the Asl al Wangariyyin dated 1651 mentions the existence of a Wangara community in Borgu. The Wangara traded with the coast of what is today the Republic of Benin and traders that met this description ‘Males’ by Ferreira Pires .
Islam spread to Yorùbáland through the activities of itinerant preachers from Borno and Hausaland, in the seventeenth century. Some of those mallams or marabouts (i.e. Muslim scholars and spiritualists) and itinerant traders probably ‘moved as far south as old Oyo and a few other urban centres of the old Oyo Empire’. Consequently, a Muslim community emerged in old Oyo by the middle of the seventeenth century.
That community was so committed to the Islamic faith that right from its early days it “sought guidance from Katsina on how to determine the precise time of sunset, most importantly, in connection with the Ramadan fast, which was why in response, Abu Abdullah B. Muhammad B. Masanih, (Dan Masani) wrote Shifa’ al ruba fi tahrif fuqaha Yorùbá. The implication of this historical event is that Islam was already well grounded and strongly established among such people at the time of their request for such Islamic guidance.
According to Balogun, “if, in fact, the document was written to guide the Muslim community in Yorùbáland, it could attest not only to the age of Islam in Yorùbáland but also to the amount of attention paid to the practice of the religion as early as the seventeenth century.” Relying on Richard and Lander, Balogun opines that it is certain that by the 18th century, Islam had spread far beyond Oyo, along the trade routes, to as far afield as Igboho, Kisi, Saki, Iseyin, Ikoyi, Ogbomoso, Owo, Ijana, Ketu and Baagri, each of which was a major and notable settlement or township in Yorùbáland.
Such a rapid spread of Islam to various parts of Yorùbáland, as noted by Balogun is a pointer to the fact that since the 17th century, the Yorùbás were not only practising but also preaching and promoting the Islamic faith which they even propagated to as far away as Dahomey, in what is now known as the Republic of Benin.
Mili Leitner posited that Islam came to Yorùbáland as early as the 14th  century when a mosque was constructed for visiting Malian Muslims. Immigration proved to be the main factor in the gradual growth of Islam in the region beginning in 1650, and conversions during the 19th century led to a more rapid growth in the local Muslim population, leading to the balance of religions that is seen today.
Share on Facebook Share
Share on TwitterTweet
Share on Pinterest Share
Share on LinkedIn Share
Share on Digg Share
Send email Mail
Print Print